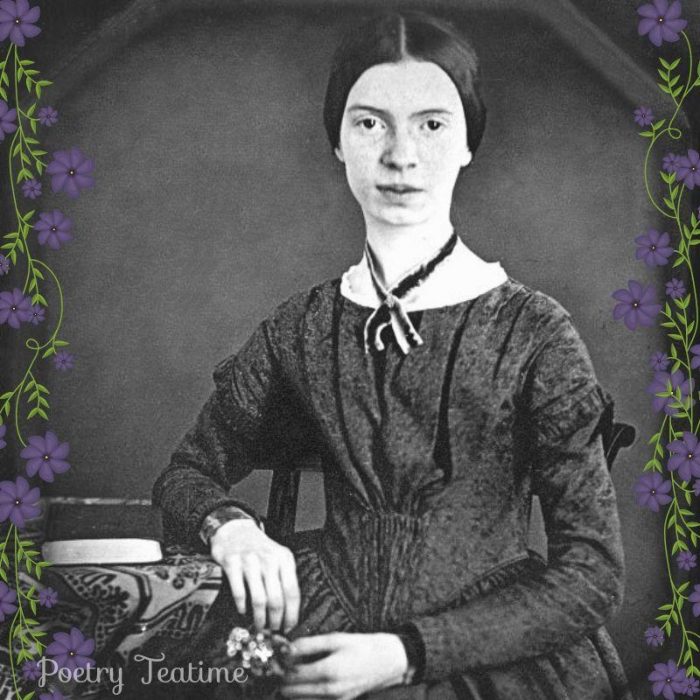 Emily Dickinson is one of the most celebrated poets in American history. Her careful observation of the world around her and her distinct style of dashes and short lines make her a fantastic poet to study and read. Today, we’ll be looking at a few of her poems as well as some fun facts about her. So let’s dive in!

Emily Dickinson lived from 1830–1886. She always stayed close to home in Amherst, Massachusetts, only leaving for one year to attend a boarding school. However, she encountered many changes during her lifetime, including the American Civil War.

Why is Emily Dickinson’s poetry so distinctive? Here are a few reasons:

Now that we’ve thought a bit about Emily Dickinson’s life, her style of poetry, and how we can keep digging for more information about her today, it’s time for tea!

Try some of Emily Dickinson’s home recipes for cakes, gingerbread, and bread loaves, from this list in LitHub. Although most of her recipes are pretty normal, she has one cake recipe that calls for 19 eggs and weighs 20 pounds when baked!

You can also sample some Emily Dickinson-themed teas blended with flowers referenced in her poems. Check out these loose-leaf teas from Adagio Teas.

During your teatime, why not spend some time outdoors? Follow in Dickinson’s footsteps by taking your teatime into the garden and watching the world around you.

Although her poems are short, they’re worth reading many times. She packs a lot of wisdom into each word and line. Go ahead and dig in!

“Fame is a bee.” (Don’t let the short length of this poem deceive you—it packs a punch!)
“A Bird, came down the Walk —” (Emily observes a bird in her garden)
“‘Hope’ is the thing with feathers –” (A great example of comparing something in nature with an idea)
“Snow flakes.” (A fun celebration of dancing snow)
“Tell all the truth but tell it slant —” (This one will take some concentration. What does it mean to tell the truth? Again, pay attention to her use of nature!)
“They shut me up in Prose –” (It isn’t easy being a girl in the 1800s, especially one who wants to write!)
“There is no Frigate like a Book” (A frigate is a type of ship. Why do you think books might be like ships? Read the poem and find out!)
Poetry for Kids: Emily Dickinson, edited by Susan Snively (includes a commentary and discussion of each of the poems)