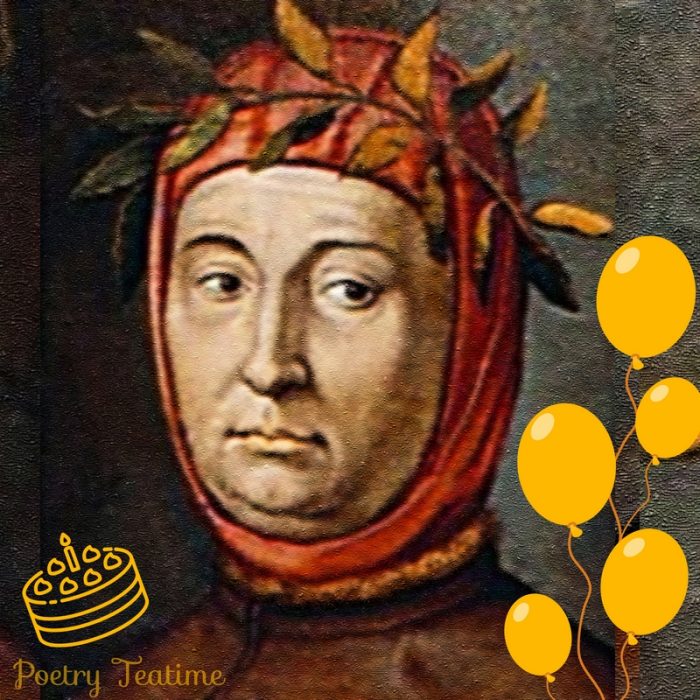 July 20th is the birthday of Italian Renaissance poet and scholar Petrarch. Petrarch is credited with beginning the Renaissance with his discovery and publication of Cicero’s letters. His style of writing sonnets was so influential that these poems are now known as “Petrarchan” sonnets. So let’s celebrate Petrarch!

Petrarch, or in Italian, Francesco Petrarca, lived from 1304–1374 C.E. Although Petrarch initially pursued a career in law, he defied his family’s wishes by switching to a study of classics and religion. He then traveled and wrote around Europe, composing many poems about his love for a woman named Laura.

Let’s take a look at a couple of Petrarchan sonnets. See if you can spot the octave and the sestet, and compare any differences you see in what the poet is saying in each part of the poem.

I once beheld on earth celestial graces
And heavenly beauties scarce to mortals known,
Whose memory yields nor joy nor grief alone,
But all things else in cloud and dreams effaces.
I saw how tears had left their weary traces
Within those eyes that once the sun outshone,
I heard those lips, in low and plaintive moan,
Breathe words to stir the mountains from their places.
Love, wisdom, courage, tenderness, and truth
Made in their mourning strains more high and dear
Than ever wove soft sounds for mortal ear;
And heaven seemed listening in such saddest ruth
The very leaves upon the bough to soothe,
Such sweetness filled the blissful atmosphere.

Oft by my faithful mirror I am told,
And by my mind outworn and altered brow,
My earthly powers impaired and weakened now,—
“Deceive thyself no more, for thou art old!”
Who strives with Nature’s laws is over-bold,
And Time to his commandment bids us bow.
Like fire that waves have quenched, I calmly vow
In life’s long dream no more my sense to fold.
And while I think, our swift existence flies,
And none can live again earth’s brief career,—
Then in my deepest heart the voice replies
Of one who now has left this mortal sphere,
But walked alone through earthly destinies,
And of all women is to fame most dear.

The Poetry of Petrarch, translated by David Young