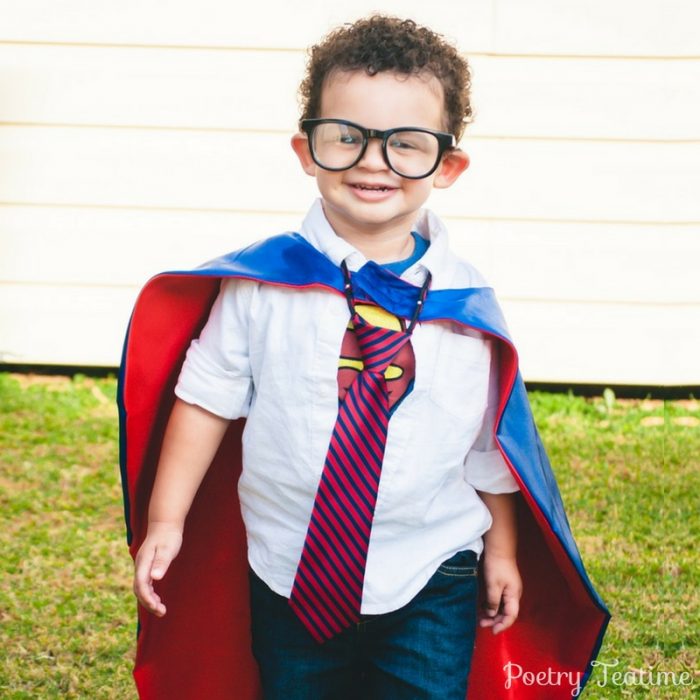 Would you rather fly or have the ability to see in the dark? Understand any animal or change color to match your surroundings? In today’s teatime, we’ll be exploring the wide world of superheroes and super poetry!

The word “superhero” has only been around since 1899 (according to the Oxford English Dictionary), but early versions of supers have been around for much longer than that. Some people consider Robin Hood an early “superhero,” with his amazing longbow abilities and crime-fighting skills. There’s also the Scarlet Pimpernel, a fictional British aristocrat who went undercover in France to rescue aristocrats during the French Revolution!

Today’s superhero tradition really kicked off in the 1930s with the rise of comic strips and comic books centered on characters with exceptional skills or superhuman abilities. The success of Superman in 1938 led to a whole wave of superheroes in the comics.

Let’s start off with some fun facts about superheroes.

Superheroes come in all shapes, powers, and sizes. In today’s teatime, we’ll get a chance to explore lots of possibilities for superpowers. But first, let’s set the stage for teatime with these decorations, foods, and activities!

So go on and design your own superheroes, secret identities, and ways to rescue the world! Enjoy celebrating superheroes in your next teatime!

Even Superheroes Have Bad Days, by Shelly Becker

Heroes and She-roes: Poems of Amazing and Everyday Heroes, by J. Patrick Lewis