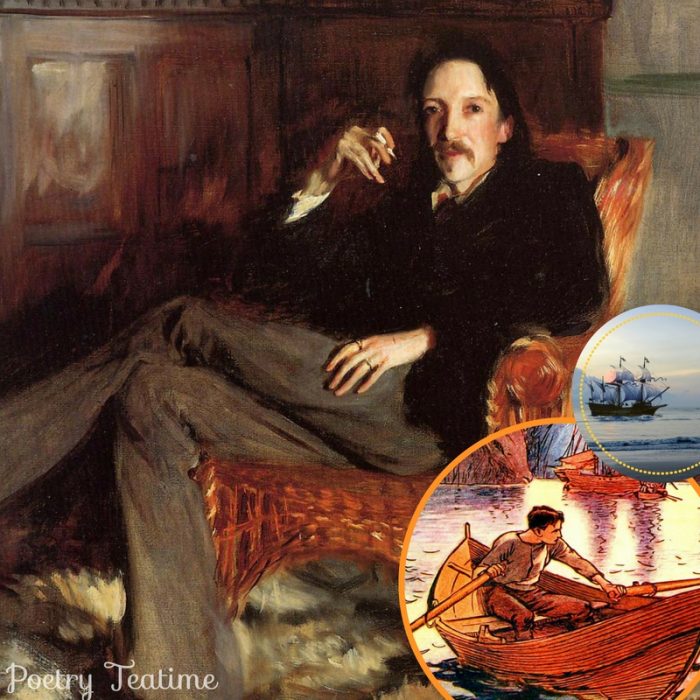 Today’s Poetry Teatime celebrates the adventurous life of Robert Louis Stevenson! You may know Stevenson by his classic adventure stories like Kidnapped and Treasure Island, which feature plenty of pirates and buried treasure. But he was also a wonderful poet whose poems stir the imagination and tickle the senses. Let’s explore Stevenson’s poetry together!

Robert Louis Stevenson was born on November 13, 1850 in Edinburgh, Scotland. He came from a family of engineers, and his father and grandfather were responsible for the construction of most of Scotland’s lighthouses. While Stevenson began university as an engineer, he eventually decided to travel the world and write. After that, he had a long and illustrious career writing adventure stories, poetry, and songs.

Stevenson traveled a lot in his life. In fact, he traveled so much that he invented a prototype of a modern-day sleeping bag! Although he wasn’t a pirate himself, he did have a criminal conviction—for throwing snowballs during his days as a student. He died while on the island of Samoa and was honored by Samoans as the Teller of Tales and buried on top of a mountain on the island.

Let’s take a journey alongside Stevenson. Breathe in the fresh air and the smell of woodsmoke in the poem “Autumn Fires.”

“Autumn Fires” from A Child’s Garden of Verses

In the other gardens
And all up the vale,
From the autumn bonfires
See the smoke trail!

Pleasant summer over
And all the summer flowers,
The red fire blazes,
The grey smoke towers.

Sing a song of seasons!
Something bright in all!
Flowers in the summer,
Fires in the fall!

Stevenson has such a wonderful knack for capturing the feelings of each season. He also describes the enjoyment of a beautiful song in the following lines.

“Bright Is the Ring” from Songs of Travel

Bright is the ring of words
When the right man rings them,
Fair the fall of songs
When the singer sings them.
Still they are carolled and said—
On wings they are carried—
After the singer is dead
And the maker buried.

Low as the singer lies
In the field of heather,
Songs of his fashion bring
The swains together.
And when the west is red
With the sunset embers,
The lover lingers and sings
And the maid remembers.

Poetry has such power to linger in the imagination! We’ve collected a few activities, resources, and poetry collections below to help you make the most of Stevenson’s poetry in your teatime.

A Child’s Garden of Verses

A Child’s Garden of Songs: The Poetry of Robert Louis Stevenson in Song, arranged by Ted Jacobs

A Child’s Garden of Verses online on Project Gutenberg