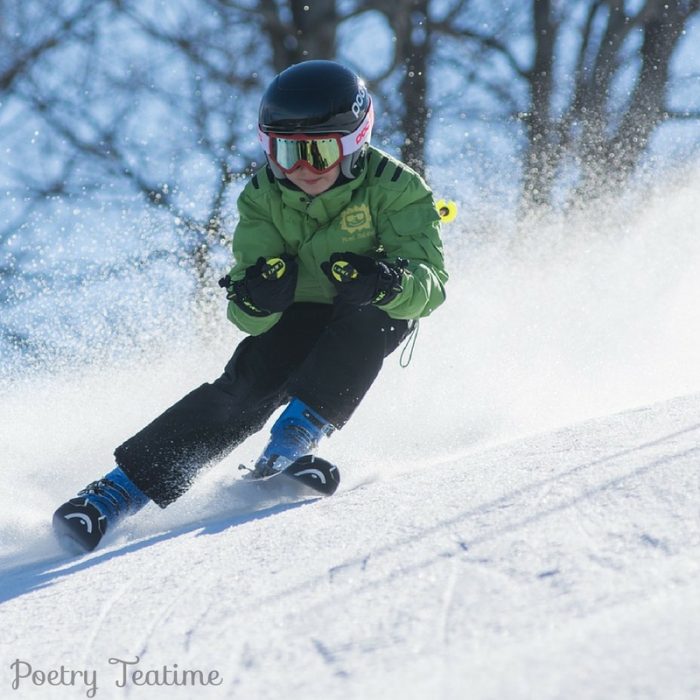 February 9 marks the start of the 2018 Winter Olympics in PyeongChang, South Korea. The games will last most of the month of February, so what better time to bundle up, brew some tea, and read some winter olympic-themed poetry!

The first Winter Olympic Games were held almost one hundred years ago in 1924 in Chamonix, France. Today, the official sports include snowboarding, hockey, curling, figure skating, skiing, and more! Norway has won the most Winter Olympic medals, with a grand total of 329 medals, followed closely by the US with 282.

Let’s start today’s teatime with a short excerpt about the breathtaking joys of ice skating from William Wordsworth’s masterpiece, The Prelude.

From The Prelude
By William Wordsworth

In the frosty season, when the sun
Was set, and, visible for many a mile,
The cottage-windows through the twilight blazed,
I heeded not the summons: happy time
It was indeed for all of us; for me
It was a time of rapture! Clear and loud
The village-clock tolled six—I wheeled about,
Proud and exulting like an untired horse
That cares not for his home.—All shod with steel
We hissed along the polished ice, in games
Confederate, imitative of the chase
And woodland pleasures,—the resounding horn,
The pack loud-chiming, and the hunted hare.
So through the darkness and the cold we flew,
And not a voice was idle: with the din
Smitten, the precipices rang aloud;
The leafless trees and every icy crag
Tinkled like iron; while far-distant hills
Into the tumult sent an alien sound
Of melancholy, not unnoticed while the stars,
Eastward, were sparkling clear, and in the west
The orange sky of evening died away.

Wordsworth’s poem captures that breathless rush and swirling beauty of ice skating and childhood so well. Now let’s venture onward into the celebration of a Winter Olympics-themed teatime!

A is for Axel: An Ice Skating Alphabet, by Kurt Browning

Snowman Paul at the Winter Olympics, by Yossi Lapid

G is for Gold Medal: An Olympics Alphabet, by Brad Herzog