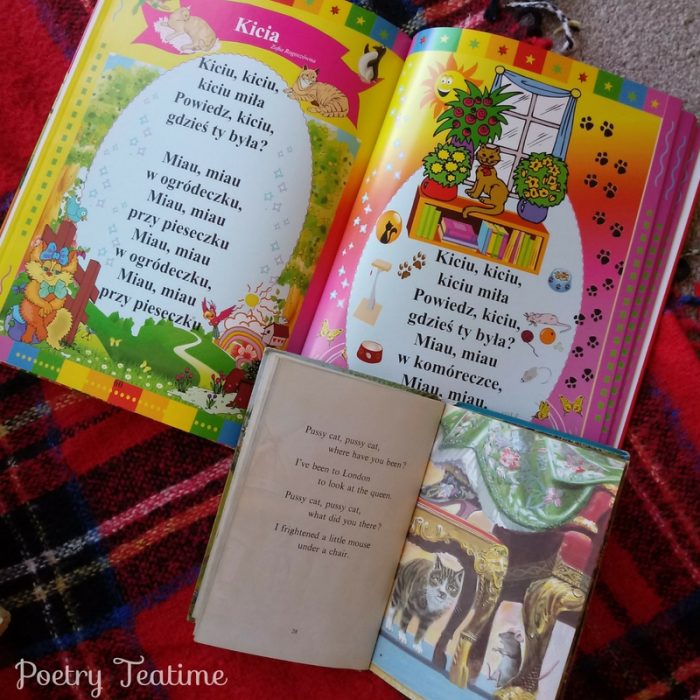 Today we are featuring a wonderful bilingual Poetry Teatime from one of our Brave Writer families. Read on for games, activities, and ideas for bringing multiple languages into your own teatime!

We are a bilingual family (or at least try to be) and love it when we can include both our languages in an activity. We are always happy to find translations of favourite books to read and for a while, we have enjoyed reading Polish translations of AA Milne’s poems alongside the originals. We also have some Polish classics that regularly make their way into Poetry Teatime.

Poetry Teatime is always enjoyable, but yesterday we turned it into a fun bilingual game. Leafing through the pages of a new Polish library book, we discovered a verse written like a conversation between a person and a cat. It wasn’t a translation but it really reminded us all of the old English nursery rhyme “Pussy Cat, Pussy Cat, Where Have You Been?”

This gave us the idea for the challenge. Each of us would find a couple of poems that we liked and then the others would have to search for a match in the other language. It could be a poem with the same title or subject matter or even one that just felt the same. If we found a few matches we would choose the one that was the best fit. And we found a partner for every poem! Some of the matches were easy to make (like the days-of-the-week and witch poems), but others were harder.

My favourite pair, I think, was the Polish summer poem which my son found and my daughter matched with an English poem about sitting on a Caribbean beach. This was because the mood in the two poems was so similar even though nothing mentioned in the first was repeated in the second.

So that's how we spent the afternoon—reading poetry and getting in some sneaky second language work too. What could be better?

What an inspiring teatime! Be sure to share your own teatime stories here for a chance to be featured on the blog!