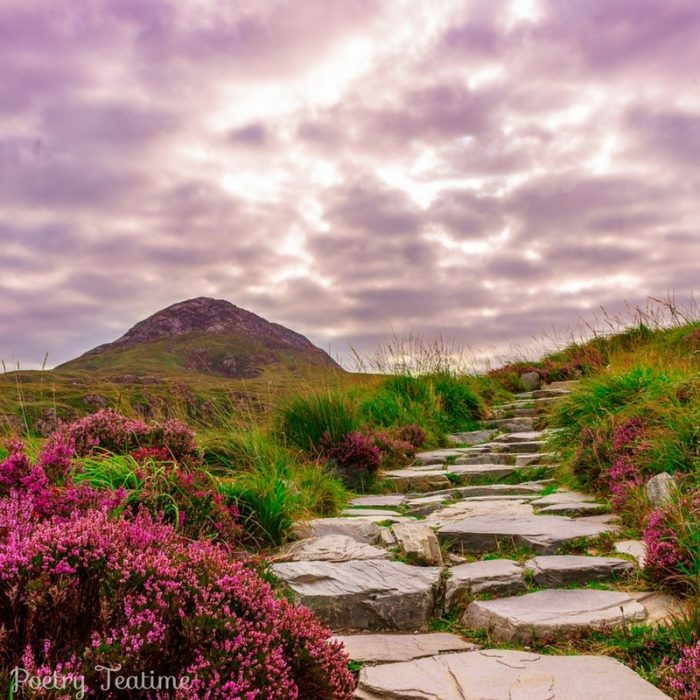 The Emerald Isle has a rich history of poets and poetry. You may know that the first limericks were written in Ireland, but did you know that Ireland is home to other verse forms like ae freslige and Deibhidhe Guilbnech Dialtach? For today’s teatime, come prepared with a touch of green and get ready to celebrate the wonders of Irish poetry!

Let’s begin with a classic poem by one of the most famous Irish poets, William Butler Yeats.

He Wishes for the Cloths of Heaven
By W.B. Yeats

Had I the heavens’ embroidered cloths,
Enwrought with golden and silver light,
The blue and the dim and the dark cloths
Of night and light and the half light,
I would spread the cloths under your feet:
But I, being poor, have only my dreams;
I have spread my dreams under your feet;
Tread softly because you tread on my dreams.

Isn’t that poem just gorgeous? Go back for a minute and read it again. It’s worth savoring!

All right, now that we’ve treasured Yeats for a bit, let’s celebrate the other wonderful poets that call Ireland home. First up is Edmund O’Rourke, praising the beauties of the Irish landscape.

By Killarney’s Lakes and Fells
By Edmund O’Rourke

By Killarney's lakes and fells,
Em'rald isles and winding bays,
Mountain paths, and woodland dells
Memory ever fondly strays;
Bounteous nature loves all lands;
Beauty wanders everywhere
Footprints leaves on many strands,
But her home is surely there.
Angels fold their wings and rest
In that Eden of the west,
Beauty's home, Killarney,
Ever fair—Killarney.

One of Ireland’s best-loved poets is the brilliant Seamus Heaney. His work is worth exploring in much more depth, but for now, here is an excerpt from one of his poems describing a car trip along the coast in County Clare.

From “Postscript”
By Seamus Heaney

...The surface of a slate-grey lake is lit
By the earthed lightening of flock of swans,
Their feathers roughed and ruffling, white on white….
Useless to think you’ll park or capture it
More thoroughly.

Ireland is also famous for limerick poems, popularized by Edward Lear in his 1846 Book of Nonsense. A limerick is a  five-line poem about humorous topics with a bouncy rhythm and repeating rhyme scheme. Check out a couple of Edward Lear’s limericks below!

There was an Old Man with a beard,
Who said, "It is just as I feared!
Two Owls and a Hen,
Four Larks and a Wren,
Have all built their nests in my beard!"

There was a Young Lady whose chin,
Resembled the point of a pin;
So she had it made sharp,
And purchased a harp,
And played several tunes with her chin.

There was a Young Lady whose nose,
Was so long that it reached to her toes;
So she hired an Old Lady,
Whose conduct was steady,
To carry that wonderful nose.

As mentioned above, Ireland is also home to quite a few styles of poetry besides limericks. Find out more about ae freslige here at the Poets Garret, and about Deibhidhe Guilbnech Dialtach and the similar style Deibide Baise Fri Toin here at Poetry Magnum Opus.

This post has barely begun to scratch the surface of Irish poetry! Make sure to explore the suggestions in the reading list below and read some more of the beauties of Irish poetry.

Irish Poems: A Collection for Children, by Fiona Waters

A Child’s Treasury of Irish Rhymes, edited by Alice Taylor

A Pot O’ Gold: A Treasury of Irish Stories, Poetry, Folklore, And (of Course) Blarney, by Kathleen Krull