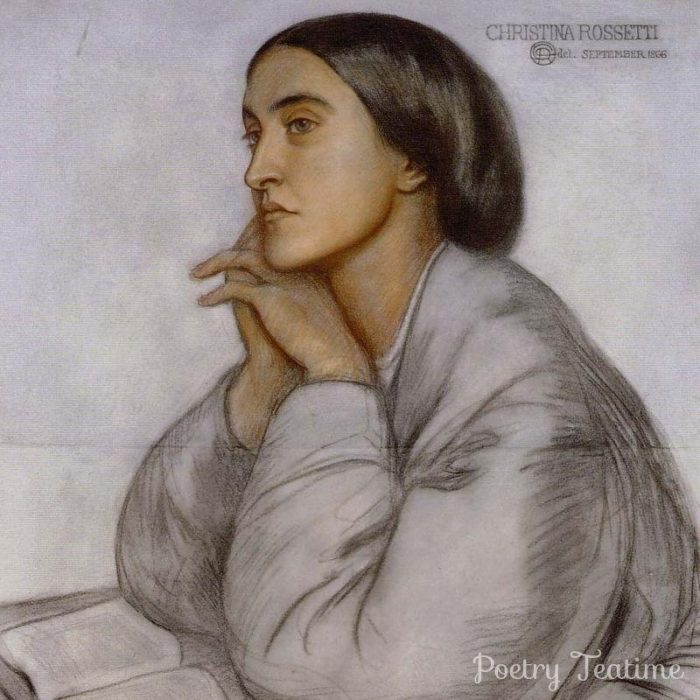 If you’ve never heard of Christina Rossetti, then you’re in for a treat! One of the Victorian Era’s most famous poets, Rossetti wrote beautiful otherworldly poems about love and loss as well as famous carols and Christmas poems like “In the Bleak Midwinter.”

Christina Rossetti (1830-1894) was one of four children of an Italian political refugee. Although all of her siblings were talented, her brother, Dante Gabriel Rossetti, was a famous artist of the Pre-Raphaelite movement. You can see an example of his work in the picture of Christina Rossetti above.

Rossetti began writing at a young age and was considered the “poet of the family” early on. By the age of seventeen, she was a nationally published poet in the UK. She and her brother Dante Gabriel would compete to see who could write a sonnet the fastest, and she was able to write one in a matter of minutes!

Many of Rossetti’s poems have a deeply religious feeling due to her Anglican faith, which helped her deal with many of the deaths and losses she experienced during her lifetime. She was also a social activist who opposed slavery and cruelty to animals. Rossetti frequently wrote about ghosts, goblins, and supernatural beings, using them to explore her own feelings about love and life.

So with all that in mind, let’s read some poems!

“Who Has Seen the Wind”

Who has seen the wind?
Neither I nor you….

How would you describe the wind? How can you tell it’s on the move? Check out Rossetti’s poem to “see” the wind come to life. With only two stanzas, this poem is great for memorizing and reciting at your Poetry Teatime!

“Sonnets Are Full of Love, and This My Tome”

...And so because you love me, and because
I love you, Mother, I have woven a wreath
Of rhymes wherewith to crown your honoured name...

When you think about a love sonnet, you may think of a poem about two lovers or about true love. But as Rossetti shows, love between a mother and daughter is just as precious and worthy of celebration.

Remember me when I am gone away…
Yet if you should forget me for a while,
And afterwards remember, do not grieve…

Has your family ever experienced the loss of a loved one, or even a special pet? Rossetti can help your family process grief, including the guilt of feeling happy even after they’re gone or of forgetting them for a little while. This is a poem that’s worth spending time on together.

“Crying, My Little One, Footsore and Weary”

Crying, my little one, footsore and weary?
Fall asleep, pretty one, warm on my shoulder...

Rossetti has written beautiful carols and poems that can be set to music. In this lullaby, a mother soothes her child to sleep. Pay attention to the soft sounds and repetitions that make this poem sound gentle and sweet.

Rossetti wrote some delicately spooky poems, and although they are often mournful, they also contain hope and a celebration of life lived well.

If you enjoyed these poems by Christina Rossetti, you may also like to read Emily Dickinson. Although these two women have very different styles, they share many reflections on life and death.

Poems and Books to Read

Make sure to explore Rossetti’s work with a couple more poems and books to enjoy!

“In the Bleak Midwinter”

Blooming Beneath the Sun, selected and illustrated by Ashley Bryan